Soon to be reality in your country?
An Illiterate Tribal went to a Bank for a Loan of 2,00,000/- to buy Buffaloes.
The Branch Manager asked what Collateral Security will he offer.
Since the Tribal didn't Understand the Concept, the Branch Manager explained in detail about Collateral Security.
The tribal kept his house as Collateral and the Loan was sanctioned for 2,00,000/- @ 9% interest for 5 Years.
In 6 months the Tribal repaid the entire Loan. The Branch Manager was very happy and asked him what he was doing with the excess Money in the hope of Getting his Deposits target fulfilled.
The Tribal said he kept it in his house locker.
The Manager then pitched for his Fixed deposit saying that the Bank will give 7% interest and that his Money will Grow.
Now Came the interesting Part
The Tribal asked him
.
.
.
.
.
.
"What Collateral Security will Your Bank offer Me to keep my Money in Bank? 😂😂
The question needs to be asked now, only with the intention of safeguarding our own Money.
The best message received recently. Worth Sharing!!!
Posted by Shurbhi.in at 08 October 1 comment:

Hair style for trip to Rome!

A woman was at her hairdresser's getting her hair styled for a trip to Rome with her husband. She mentioned the trip to the hairdresser, who responded:
" Rome ? Why would anyone want to go there? It's crowded and dirty.. You're crazy to go to Rome . So, how are you getting there?"
"We're taking Aer lingus" was the reply. "We got a great rate!"
"Aer Lingus?" exclaimed the hairdresser. "That's a terrible airline. Their planes are old, their flight attendants are ugly, and they're always late. So, where are you staying in Rome?"
"We'll be at this exclusive little place over on Rome 's Tiber River called Teste."
"Don't go any further. I know that place. Everybody thinks its gonna be something special and exclusive, but it's really a dump."
"We're going to go to see the Vatican and maybe get to see the Pope.."
"That's rich," laughed the hairdresser. "You and a million other people trying to see him. He'll look the size of an ant. Boy, good luck on this lousy trip of yours. You're going to need it."
A month later, the woman again came in for a hairdo. The hairdresser asked her about her trip to me .
"It was wonderful," explained the woman, "not only were we on time in one of Aer Lingus's brand new planes, but it was overbooked and they bumped us up to Premier Class. The food and wine were wonderful and I had a handsome 28-year-old steward who waited on me hand and foot.
And the hotel was great! They'd just finished a multi million remodeling job, and now it's a jewel, the finest hotel in the city. They, too, were overbooked, so they apologized and gave us their owner's suite at no extra charge!"
"Well," muttered the hairdresser, "that's all well and good, but I know you didn't get to see the Pope."
"Actually, we were quite lucky, because as we toured the Vatican , a Swiss Guard tapped me on the shoulder, and explained that the Pope likes to meet some of the visitors and if I'd be so kind as to step into his private room and wait the Pope would personally greet me.
Sure enough, five minutes later, the Pope walked through the door and shook my hand! I knelt down and he spoke a few words to me."
"Oh, really! What'd he say ?"
He said: "Who f*cked up your hair?" 😂
Posted by Shurbhi.in at 08 October No comments: 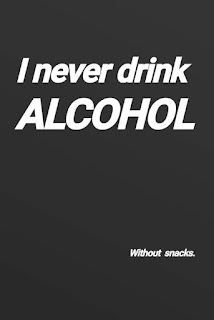 Never drink alcohol,
Without Snacks
;-)
Posted by Shurbhi.in at 26 September No comments:

*A foreigner came to Kashi.*
*Visited Kashi's Lord Viswanath temple and all the ghats.*
*Then he bought a VIBHUTHI packet from a boy selling on the street.*
*Foreigner then asked, "What is its expiry date?"*
*Boy replied looking surprised, "Its made from expired people and when you apply on your forehead it increases your expiry date."*
👍😄 Incredible India
Posted by Shurbhi.in at 26 September No comments: 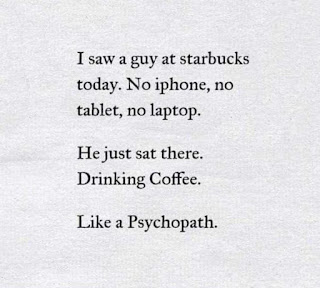 A guy was "drinking coffee" at Starbucks. He had no iPhone, no tablet, no laptop!!
Posted by Shurbhi.in at 24 September No comments:

Vagaries of English Language!
Enjoy!!!😀😀😀
- Wonder why the word funeral starts with FUN?
-Why isn't a Fireman called a Water-man?
- How come Lipstick doesn't do what it says?
- If money doesn't grow on trees, how come Banks have Branches?
- If a Vegetarian eats vegetables, what does a Humanitarian eat?
- How do you get off a non-stop Flight?
- Why are goods sent by ship called CARGO and those sent by truck SHIPMENT?
- Why do we put cups in the dishwasher and the dishes in the Cupboard?
- Why do doctors 'practice' medicine? Are they having practice at the cost of the patients?
- Why is it called 'Rush Hour' when traffic moves at its slowest then?
- How come Noses run and Feet smell?
- Why do they call it a TV 'set' when there is only one?
- What are you vacating when you go on a vacation?
We can never find the answers, can we?
So just enjoy the pun and fun of the English language!!
Posted by Shurbhi.in at 23 September No comments:

Why Indian Students are Disliked Abroad?

*Why Indian Students are Disliked Abroad!*
TOO GOOD!
It was the first day of school in the USA and a new Indian student named Chandra Subramanian entered the 4th grade.
The teacher said, "Let's begin by reviewing some American History.
Teacher :- Who said 'Give me Liberty, or give me Death'?"
She saw a sea of blank faces except for Chandra, who had his hand up:
Chandra :- 'Patrick Henry, 1775,'.
'Very good!
Teacher :- Who said 'Government of the People, by the People, for the People,
shall not perish from the Earth?''
Again, no response except from Chandra:- 'Abraham Lincoln, 1863'.
The teacher snapped at the class, 'Class, you should be ashamed.
Chandra, who is new to our country, knows more about our history than you do.'
She heard a loud stage whisper: 'Fuck the Indians.'
'Who said that?' she demanded. But Chandra put his hand up. 'General Custer, 1862.'
At that point, a student in the back said, 'I'm gonna puke.'
The teacher glares around and asks 'All right! Now, who said that?'
Again, Chandra says, 'George Bush to the Japanese Prime Minister, 1991.'
Now furious, another student yells, 'Oh yeah? Suck this!'
Chandra jumps out of his chair waving his hand and shouts to the teacher,
'Bill Clinton to Monica Lewinsky, 1997.'
Now with almost mob hysteria someone said
'You little shit. If you say anything else, I'll kill you.'
Chandra frantically yells at the top of his voice, 'Michael Jackson to the child witness testifying against him in 2004.'
The teacher fainted. And as the class gathered around the teacher on the floor, someone said, 'Oh shit, we're screwed!'
And Chandra said quietly, 'Lehmann Brothers, November 4th, 2008'.
😝😝👍
Posted by Shurbhi.in at 19 September No comments:

Today is 'World Marriage Day'.
Let us keep 2 minutes' silence and read some quotes of fellow-sufferers.
A few interesting
*GLOBAL OPINIONS ABOUT MARRIAGE* :
After marriage, husband and wife become two sides of a coin, they just can't face each other, but still they stay together.
– Al Gore 😛😛
By all means marry. If you get a good wife, you'll be happy. If you get a bad one, you'll become a philosopher.
– Socrates 😝😝
Women inspire us to great things, and prevent us from achieving them.
– Mike Tyson 😝😝
I had some words with my wife, and she had some paragraphs 📄with me.
– Bill Clinton 😉😉
"There's a way of transferring funds that is even faster than electronic banking. It's called marriage."
– Michael Jordan 😜
A good wife always forgives her husband when she's wrong.
– Barack Obama😳😳
When you are in love,
Wonders happen.
But once you get married,
You wonder, what happened.
😜
🍁And the best one …
"Marriage is a beautiful forest where Brave Lions are killed by beautiful Deer".😜😂🍁
Have a wonderful day !!
Posted by Shurbhi.in at 16 September No comments:

*3 Fucking Laws of Management
If you learn them, no one can beat you in Corporate Management, but unfortunately even Harvard Business School do not teach them...*🤔!
1. *Fucking Law of Delivery Time -* No matter how hard and fast you fuck, the child comes after 9 months.
*Moral -* Pressurizing does not alter delivery period.
2. *Fucking Law of Direction -* Even though both holes  are nearby, if by a wrong shot, you enter the wrong hole, no matter how hard you fuck, you never get a child.
*Moral -* Right direction and focus is very important to get the results, even few centimeters away from right direction, even if it gives satisfaction, cannot lead to results.
3. *Fucking Law of Human Resources -* By appointing 4 men to fuck 1 woman, you cannot get 4 children, but if you appoint one man to fuck  4 women, you can get 4 children.
*Moral -* Appoint the right person at the right position. Otherwise you would keep on wondering, why you are not getting the results even after appointing more men. And appoint more women.😉
```This is why sex education is necessary and should be a part of
*National Skills Development Program!*
😜😜😎
Posted by Shurbhi.in at 13 September No comments: 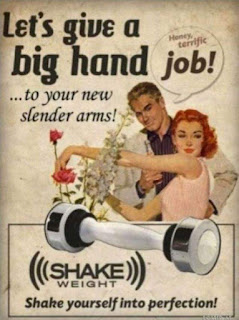 Give your slender Arms the Shake to Perfection.
Posted by Shurbhi.in at 09 September No comments: 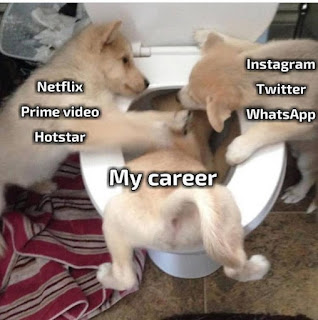